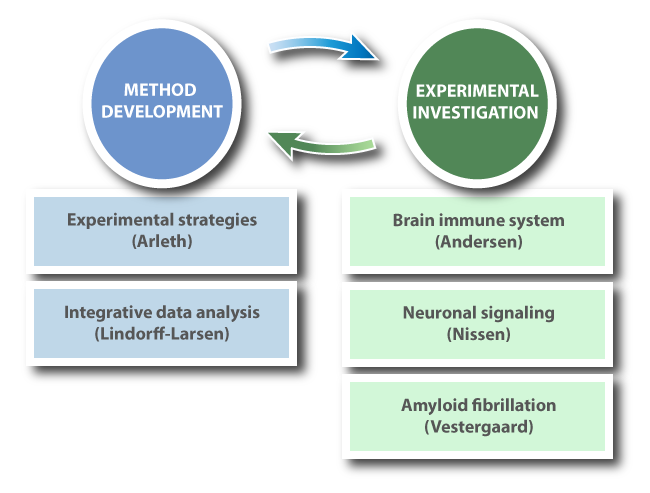 The overarching goal of BRAINSTRUC is to understand the molecular basis of selected brain functions and diseases through spatiotemporal structural models of complex biomolecular systems.

The BRAINSTRUC consortium is focusing on two overall goals:

The first goal is necessitated by the complexity and size of the biological systems studied in BRAINSTRUC. It will include further developments of data-integration and simulation methods as well as experimental developments. A particular focus is on the exploitation of the novel opportunities offered at the new large-scale infrastructures at the European Spallation Source (ESS) and MAX-IV in Lund, as well as the recent revolutionary development within cryo-electron microscopy.

Results from the first goal, will be used to adress the second goal through the investigation of three central and highly complex biomolecular systems involved in neuronal signalling, inflammation and disease. Structural studies of these systems represent significant experimental challenges:

By using the most advanced techniques available in structural biology BRAINSTRUC will provide significant insight into the molecular basis of three selected aspects of neuronal/glial function and dysfunction.

As described, the biological focus will necessitate and drive the method development within BRAINSTRUC. This will result in new tools that are central for obtaining the anticipated biological results. In addition, these novel methods and tools will be highly valuable for the broader structural biology community, thereby stimulating further to novel achievements, also beyond the scope of BRAINSTRUC.

BRAINSTRUC also has an important mission to significantly push the frontiers globally within structural biology and in particular to train young scientists to continue the strong tradition for excellence in Danish structural biology. BRAINSTRUC will allow its members to take maximum advantage of nearby world-class research infrastructure (ESS, MAX IV, eXFEL). A close interplay with staff at these new and developing facilities promises to increase mutual benefits and hence overall value of the large investments in the region.

BRAINSTRUC is a Lundbeck Foundation initiative on integrative structural biology funded by a 3+2 year grant.